It's June.
And I'm still wearing my boots.

Pretty much how you're feeling this year, right, New England?

Actually, this song just perfectly captures the dichotomy of life in the United States Northeast - New England and New York can probably be lumped together here.  Winter is hard, but the rest of the year.... just lovely and welcoming.

And, with the harsh winter New England is getting, I figured y'all needed a tribute.


(And yes, I did just mention Tanya Donelly.  Why do you ask?)
Posted by redargyle at 9:40 AM No comments:

It was only a matter of time, people.  I was going to break this seal eventually.   I just needed to find the right way and the right time.

On March 12, 1991, Throwing Muses released The Real Ramona, two weeks ahead of schedule.  I walked into that record store with the full intention of purchasing R.E.M.'s Out of Time, which was also released that day.  But, as Throwing Muses was my favorite band (still is), I had to go see if, maybe, just maybe, there was a schedule change.

Totally had to do a double today. But I had a good reason.  Mary's Danish was one great band with two amazing voices.  Gretchen Seager's voice was clearly well-suited for straight-ahead rock music.  Her voice was - is - raspy and powerful.  Take her lead vocal (with Julie Ritter taking background here) on their first single, "Don't Crash The Car Tonight", a drunk driving PSA waiting to happen....


Julie Ritter's voice, on the other hand, has a more bluesy feel.  Their 2nd single featured her voice (with Gretchen on background here) on a meloncholy ballad with a countryish - cowpunk, maybe - feel.


In both cases, their harmonies made the songs work, but it made for a versatile band.  Sadly, they broke up under label pressures in the early 90's, but their music lives on.

So far this week, I have given you music from the 80's and called it guilt-free.  Well, guilty is in the eye of the beholder.

Angel Olsen's album Burn Your Fire For No Witness was, inarguably, one of the best of 2014 (on my list, it tied for #1).  It is criminal how ignored by radio - country, rock, whatever - this album was.  It was certainly in my heavy rotation all year long, and it will remain there for years to come.

The entire album reminds me a lot of another classic album - Liz Phair's Exile in Guyville.  Both are angry and brilliant and occasionally profane.   Both are lo-fi masterpieces.  Both vacillate between electric fuzz and acoustic melancholy.

This was Angel Olsen's first full-band album (and only her 2nd overall).  Who knows what brilliance is to come?

As an added bonus, here is Olsen, performing the song live in 2013, before her album was completed.  It's a little sparser, but it is amazing, still.

You might wonder how I selected the songs for this Guilt-Free week.

I put my iPod on Shuffle.

And Track #2 was this song, the first national single for Los Angeles band Concrete Blonde.  No one knew who they were, and then they disappeared for a few years.  This song is angry, and brilliant, and paints a much different picture of Hollywood - a more true one, if you've ever been - than you see in the movies.

I don't mind you coming here
And wastin' all my time
'Cause when you're standing oh, so near
I kinda lose my mind

Who among us have not felt this way?  Rik Ocasek is just singing your feels.  So, I've decided to kick off Guilt-Free Week with a classic by The Cars.

Posted by redargyle at 11:41 AM No comments:

Or this blog, I guess.

Before she was Juliana Hatfield, she was lead singer of a band called the Blake Babies, featuring John Strohm and Freda Boner (who recruited Juliana) and occasionally their buddy Evan Dando, who later went on to found The Lemonheads (who occasionally had Juliana and John as members).  The Blake Babies broke up in the early 90's, but the four of them (not the well-received three-piece) got back together in 2001 for one last hurrah.

By far, the best song on God Bless The Blake Babies was this duet featuring Juliana and Evan. It's a dark, cool, angry, sad song that will worm its way into your ears and hook itself into your brain.  It isn't a typical Blake Babies song - it's much darker and more mature, to be sure - but it's close enough that you know it's them.


The song was so good, and the chemistry between the two singers so strong, that they toured together as solo acts without the rest of the band and reprised this song. Check out the ad lib in this one!!!!!!

Posted by redargyle at 3:32 PM No comments:

You aren't getting the one you expected.

This isn't yet a single.  I really hope that it is.  The song that closes Sucker, it is, in this writer's opinion, the best song on the album.  It is full of ache and angst and hurt and love. It deserves to be a gigantic hit, and I hope it is.

This live performance from The Late Show With David Letterman begs two questions:

1. When did Charli stop getting dressed for public appearances?

2. Why did Dave give Charli a Cat Paw? 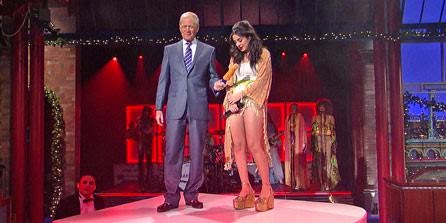 Posted by redargyle at 9:11 AM No comments:

On the surface, this song is hugely misongynistic.  Gee, T.I. has pretty high standards in women...

....until Iggy Iggy turns it into a brilliant call-and-response rap.   There are few people who T.I. would allow to knock him down a few pegs.  Iggy Azalea is one of them.

Posted by redargyle at 11:00 AM No comments:

I was NOT a fan of "All About That Bass", which was a body shaming song against body shaming wrapped up in some back pride.

I AM a fan of "Lips Are Movin'", which has a lot of the same do-wop sensibilities, white-girl rapping.... and a kitty cat dress.  Let's face it.  We all love the kitty cat dress.

Truthfully, it's an angrier song, but it's a lot more fun.  And I am truthfully happy to see someone with a lick of songwriting talent become more than a 1-hit wonder.

Posted by redargyle at 10:07 AM No comments:

It was a brilliant idea.

Get an unsung, excellent musician to score the TV show Gilmore Girls. Best show ever, by the way.  But that's for another day;

Sam Phillips was that musician.

This song is from her first album as Sam (her real name is Leslie, under which moniker she performed as a Christian artist), and it is brilliant and quiet while still conveying the ache of the song.

Posted by redargyle at 11:53 AM No comments:

Here's What You've Missed So Far